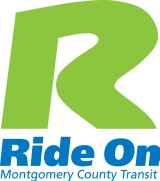 The Division of Transit Services, which is under the Montgomery County Department of Transportation, coordinates transit services in Montgomery County. The Ride On bus system consists of 335 County owned and operated buses. Ride On service is tightly integrated into the services of other providers, including the Washington Metropolitan Area Transit Authority’s Metrobus and Metrorail and the Maryland Transit Administration’s (MTA) MARC commuter rail and MTA commuter bus systems.  The North Bethesda area is served by 13 Ride On routes.